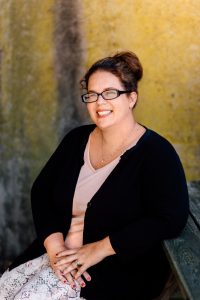 Beth was born and raised in Parkersburg, WV. She graduated from Parkersburg South High School in 1998, and from WVU-Parkersburg in 2002 with a Bachelor’s Degree in Business Administration/Accounting.

During college, she began working at her father’s antique store in Marietta, Ohio and quickly became an antique “junkie”. While she has many “finds” over the years that she loves to talk about, her best one would have to be her husband, Mike, who is also a collector of many things. After meeting Mike, she moved from WV to Monroe County Ohio, where she has now lived for 17 years. They have a 13-year-old son, Nate, who is their pride and joy, and quickly following in his parent’s bargain hunting footsteps.

Despite growing up in the city, Beth now could never see herself anywhere else but living in the country. Her favorite season is spring and she loves taking care of her fur/feathered babies. They have one cat, Miss Kitty, two dogs, Simon and Chloe and a hen house full of chickens (with two roosters). In her spare time, she can be found searching for yard sales and flea markets, or just spending time with family and friends.